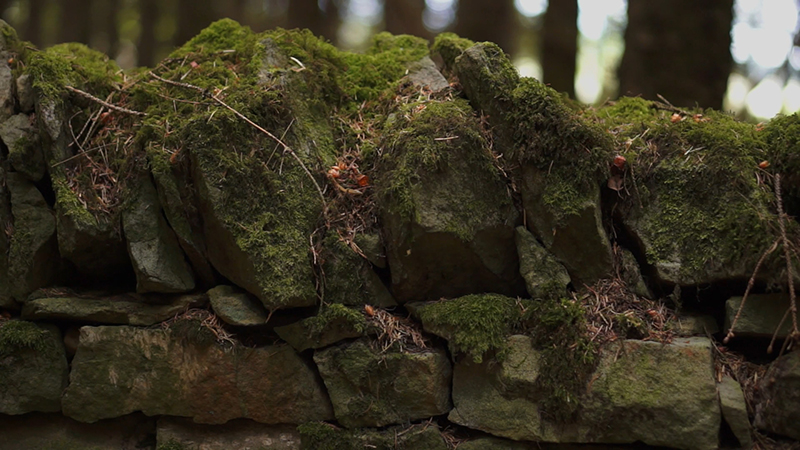 Land and Art Entwined: Six Films from the North Country

The past 18 months or so has been a source of seemingly endless frustration, innovation, panic, opportunity, loss and revelation. Humanity has had a lot on its plate. Thankfully, we and many others found refuge in art, one of humanity’s most rewarding endeavours.

WeLove Media was lucky enough to be commissioned to film with Visual Arts in Rural Communities (VARC) in rural Northumberland over the past two years. When so many other film projects fell by the wayside due to pandemic restrictions, lockdowns, and shifting regulations, six incredible artist residences in the Kielder Forest, Tarset and Highgreen Manor showed us what was really important.

In the autumn of 2019 we began filming with landscape painter Sam Douglas at Highgreen Manor. Highgreen is home to the VARC residencies and Sam was to spend 10 months soaking up the wild countryside and ancient places surrounding the property near Otterburn. His natural affinity with neolithic structures, crags, burial mounds and ancient sites of worship were part of his almost mystic vision for Northumberland’s wide open spaces.

We asked Sam to take us to some of his favourite places to capture him sketching and interacting with nature. The idea was to reflect on his love of wide open spaces and finding hidden knowledge in the landscape, and the adventurous side of Sam’s spirit is apparent.

The second day’s filming took place during the first pandemic lockdown in June 2020 when Sam had spent months in splendid isolation. We talked about the way ancient cupola rock art, nuclear sunsets and stone age rituals all influence his paintings. The resulting film is an acid-washed investigation of his notebooks, sketches and layered paintings.

Complexity was built into the next artist’s residency. Catriona Gallagher is a filmmaker who works with a wide variety of media, both physical and digital, to explore her subjects. What she found in the rolling green hills and vast forested tracts of the Northumberland National Park was a sense of artificial creation, where nature is created to serve human interests.

Again, the residency lasted 10 months, from September 2020 to June 2021. Catriona, who spends most of her time in Greece with her partner, had to over-winter in a rural area with a sparse population. She used that time to film her guided walks with local people who taught her about the agriculture and ecology of Highgreen and Tarset. The realisation that the outcrops of trees dotting the landscape are not the result of natural growth, but farm plantations to be sold for timber, provided the theme for her residency – that much of the UK countryside is ‘artificial natural’.

Catriona’s work includes scaled models of the plantations – macquettes – along with detailed map and relief drawings, 3D graphics and 3D printed foliage. She told me that she had also wanted to create a virtual reality character that would tell viewers about the features in the landscape, but there wasn’t time. Her ideas involve deep research and the film reflects the rich level of analysis that she applies to her art.

During spring and summer 2021, a series of four shorter residencies followed from five diverse artists. Each had one month from their arrival to research, conceive and create works in partnership with local cultural organisations.

Printmaker Emily Ketteringham used her strong interest in the colours of nature to create unique prints in association with Unison Colour, an excellent local business making handmade pastels that are sold worldwide.

Jo Hodges and Robbie Coleman worked together with a choir based at Tarset Village Hall, taking the lyrics of one of their songs and displaying the words on the outside of the building to show their strong bond with people in the local community. They also asked visitors to Highgreen to gather natural objects from a local wood to create a self-assembled exhibition.

The final residency saw Bridget Kennedy link up with the cultural centre in the small town of Bellingham to study local history and make rudimentary looms to weave with natural materials like nettle fibres. Bridget then took groups of people up to a local beauty spot, the waterfall Hareshaw Linn, to work with the looms and make their own natural textiles.

All six of the films were shown as part of the Entwined project’s exhibition launch at Highgreen Manor on 4 September 2021 and then again at Vane Gallery in Newcastle upon Tyne from 1 December 2021. Thanks to all of the artists who took part and to VARC and project director Helen Pailing for their support.

Posted on 31st December 2021 in the category Artist