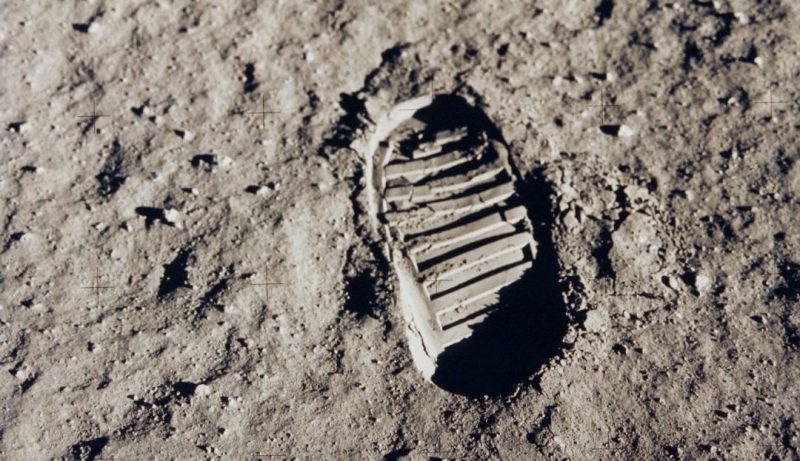 Apollo in Concrete: To The Far Pavilions of the Moon and Back

Apollo 11 will forever be remembered as the space mission that saw mankind set foot on another world. It was the apex of the first space age in a time of global conflict, yet NASA’s accomplishments eased in a period of planet-wide cooperation and a focus on humanity

There is so much to unpack about NASA’s Apollo programme and the successful moon landings. The facts by themselves are confounding. In July 1969 the US space agency sent three astronauts to the moon aboard the largest machine ever constructed – the mission rocket Saturn V – fitted with less computing power than you would find in a modern washing machine. The entire mission was run using technology that would have been outstripped by any modern smartphone.

Chief architect of Saturn V and direct of the Marshall Space Flight Center was Wernher von Braun, a pioneer of the Nazi rocket warfare programme and designer of the V2 rocket. Von Braun and members of his engineering team surrendered to the American army in Austria in May 1945 after escaping from their Nazi SS guard, who had orders to execute them rather than allow them to fall into enemy hands.

On his surrender Von Braun issued this incredible statement to the press: “We knew that we had created a new means of warfare, and the question as to what nation, to what victorious nation we were willing to entrust this brainchild of ours was a moral decision more than anything else. We wanted to see the world spared another conflict such as Germany had just been through, and we felt that only by surrendering such a weapon to people who are guided not by the laws of materialism but by Christianity and humanity could such an assurance to the world be best secured.”

An Era of Optimism 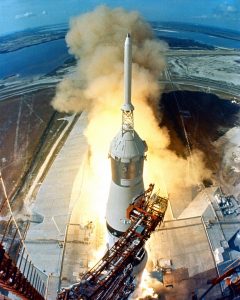 Von Braun’s optimism and his belief in the rocket’s ability to fuel space exploration were noted by the US government and, in part, explain what happened next. His transfer to NASA via the US Army was completed shortly after the space agency’s formation in 1958, and his work on the Saturn rockets – to carry heavy payloads into and beyond Earth orbit – became the backbone of the Apollo missions.

Apollo followed NASA’s preceding mission programme Gemini, by drawing its call sign from classical mythology. Astronauts, like bomber pilots, gave names to their spaceships and so the Command Module was named ‘Columbia’ after the cannon ‘Columbiad’ used to launch Jules Verne’s moonship in his story ‘From the Earth to the Moon’. The Lunar Module (LM) was simply named ‘Eagle’ from the eagle used on the mission insignia. By contrast Apollo 10 astronauts whimsically named their spaceships ‘Charlie Brown’ and ‘Snoopy’ from the Charles Schulz comic strip characters in ‘Peanuts’.

Apollo 11’s mission to the moon and back took eight days, three hours, 18 minutes and 35 seconds. It launched on its round trip of 935,054 miles on 16 July 1969. Commander Neil Armstrong and LM pilot Buzz Aldrin spent 21 hours and 36 minutes on the moon, with seven hours of sleep, while Command Module pilot Michael Collins waited for them in lunar orbit. On the surface they literally kicked up dust to see how it would react and tested the spacesuit’s reaction to sun and shadow.

Aldrin and Armstrong also collected lunar soil and rock samples, and left behind commemorative medallions with the names of three Apollo 1 astronauts who lost their lives in a launch pad fire, and two cosmonauts who also died in accidents. A one-and-a-half inch silicon disk, containing goodwill messages from 73 countries, and the names of congressional and NASA leaders, also stayed. 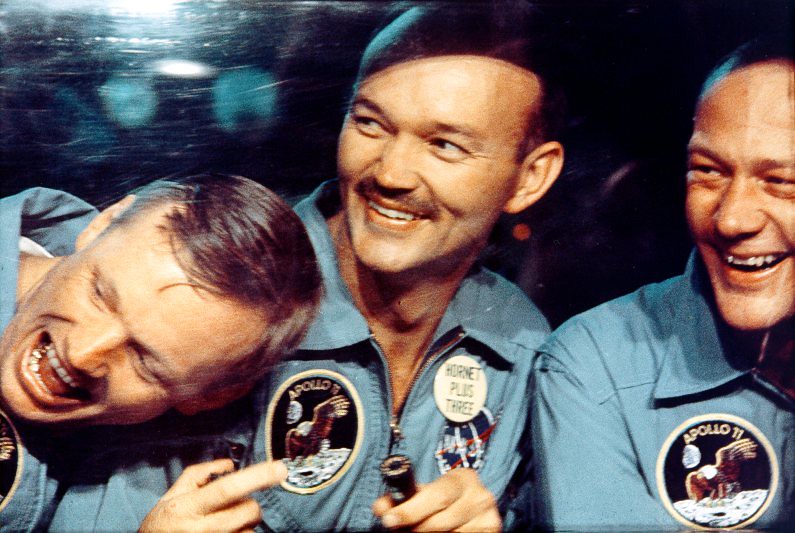 L to R: Neil Armstrong, Michael Collins and Buzz Aldrin on their return to Earth

Both moon walkers gained worldwide fame for their exploits and were instantly memorialised across the globe. Their achievements have been felt technologically, socially and culturally by the whole of humanity. Meanwhile in a country far, far away, one of Britain’s leading post-war abstract artists, Victor Pasmore, was completing his own tribute to the moon landing.

Pasmore’s ‘Apollo Pavilion‘ is widely acknowledged as one of the UK’s most important pieces of brutalist architecture. Part sculpture, part building, this abstract concrete construction has divided opinion since its completion in January 1970, despite honouring one of mankind’s greatest achievements.

Brutalism emerged in the 1950s and its buildings are typified by rigidly geometric, monolithic blocks of poured concrete. Pasmore, working at nearby Newcastle University, began working with the Peterlee Development Corporation in 1955 to help draft parts of what was a ‘new town‘ in the wake of World War Two. His pavilion was designed to provide an artistic uplift to their plans for the town’s Sunny Blunts estate.

Pasmore imagined that his artwork could “lift the activity of an urban housing community”, in the same way as the Apollo 11 moon landing could, taking urban planning “onto a universal plane”. The pavilion tied together two parts of the estate across a man-made water course in an attempt to reframe the built environment as more than simply functional. 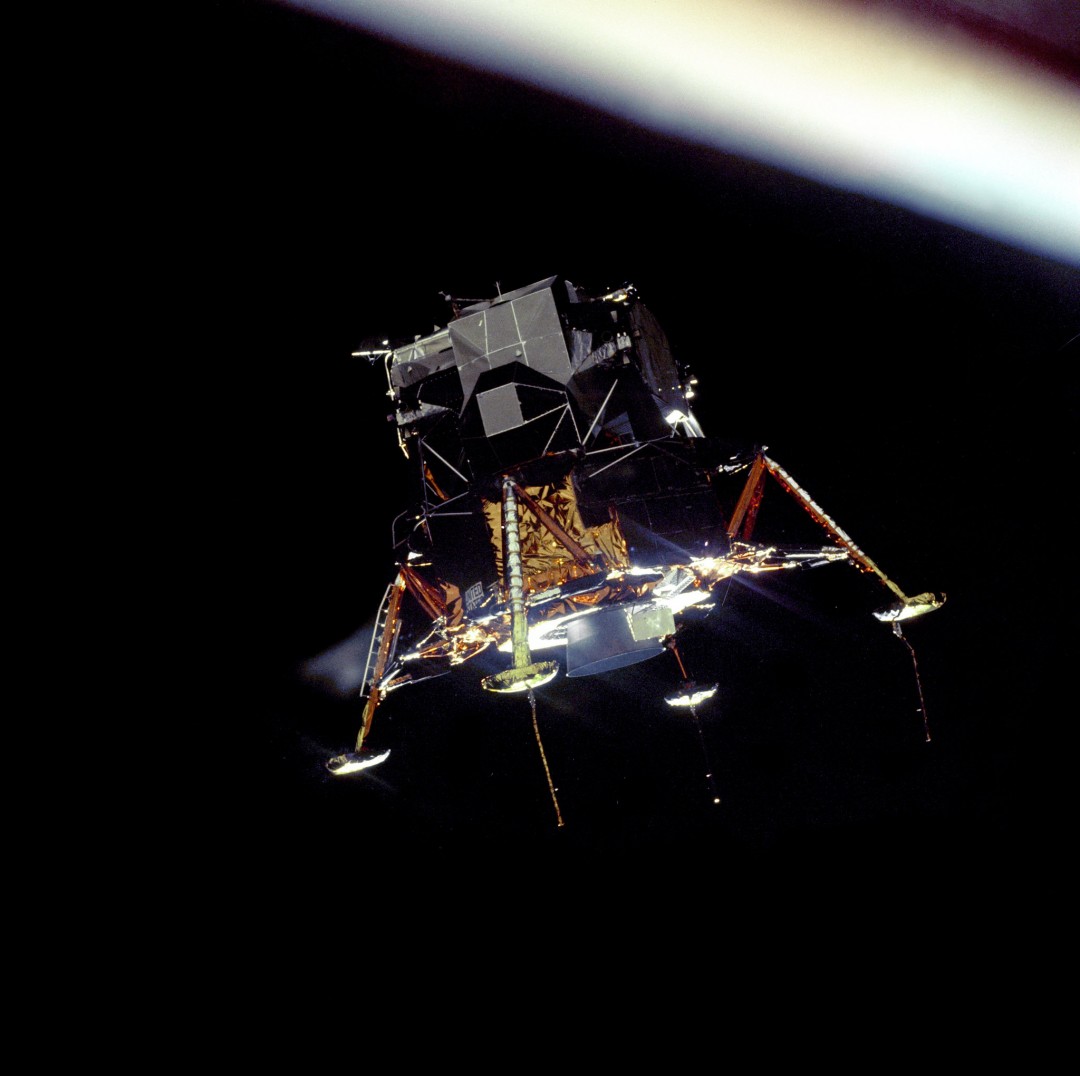 Eagle Lunar Module in orbit around the moon

But despite Pasmore’s request for the piece to be named in recognition of the Apollo mission and its extraordinary success, the Peterlee Development Corporation ignored his wishes and blandly called it Pasmore’s Pavilion. People living on the estate, perhaps due to their antipathy to art or brutalist sculpture, did not connect with the piece in the way Pasmore expected either.

Requests to demolish the pavilion over the following decades were seriously considered. Local residents told councillors that the structure had become a magnet for anti-social behaviour and grafitti. A letter from Pasmore to the development corporation in 1982 noted with grim humour that the local council had been asked to blow up the pavilion, but could not afford the bomb to do the job.

Following the establishment of a residents group in 2002, a clean up of the site followed and the structure began to be called the Apollo Pavilion in a nod to Pasmore’s ambitions. The years that followed saw a deeper appreciation of the site, tempered by the accompanying love-hate reactions from visitors to the site and residents.

Rehabilitation truly began in 2016 when the government’s architecture minister John Penrose awarded the site a Grade II* listing. Nick Bridgland, designation team leader at English Heritage which had recommended it for listing, said: “Named in homage of space exploration, the pavilion showed the bold optimism of those building the new town of Peterlee.

“Pasmore [was] one of Britain’s leading post-war artists and the pavilion is as much an abstract sculpture as it is a building, providing a focal point to the small park at the centre of the community. After decades of gradual decline, the restoration of the pavilion in 2009 has once again revealed its striking design.”

Then prior to 2019 and the 50th anniversary of construction, Durham County Council put in place plans to create a lengthy programme of activity to celebrate Pasmore and his creation.

Local songwriter Barry Hyde, of renowned indie rock group The Futureheads, was asked to work together with local schoolchildren to write, record and perform a song idealising the spirit of the Apollo missions and the pavilion. WeLove Media captured the results of their recording session in the form of a short music video. Working together with animator Ed Murray we created a fun piece that highlights Hyde’s emotive and aspirational lyrics, as well as the optimism of the children’s voices.

Steve Messam, an artist who works on large-scale pubic installations, was commissioned to create a temporary sculpture that would transform the concrete structure into a piece that would encourage interaction. His bright orange inflatable wrap around forms were designed to get local residents and schools to create new memories and opinions about the pavilion.

Messam began working with schools in the area, along with artists Sara Cooper and Vicky Holbrough, to deliver the local council’s Playful Places project. The aim was to change the way that young people think about art: to look at how it can alter people’s perception and remake community spaces into something new and exciting.

Pupils at nearby primary and middle schools created their own inflatable sculptures from ready-made materials (including recycled plastic shopping bags) and installed them in their schoolyards and classrooms. The results were surprising, spontaneous and inspired. They used Messam’s workshops on how to build inflatable sculptures to develop their ideas about how and who should create art and to bring their plans to life by working together.

Then one bright September day, Messam brought four massive orange inflatable sculptures to the Sunny Blunts estate. He and his team wrapped each sculpture around the pavilion and, literally, blew it up. For four days the site was transformed in a burst of colour that bound the grey buildings and concrete strictures of Pasmore’s architectural artwork with gently swaying cuboids, capturing and reflecting sunlight during the day and then lighting up at night.

WeLove Media was commissioned to shoot a documentary film showing how the artwork was made and its significance to the community, the Apollo mission and Pasmore’s ambitious project.

Apollo: New Visions of a Community Sculpture from welovemedia on Vimeo.

“Yes it’s about the Apollo Pavilion, but it’s about 1969, it’s about the Apollo space missions,” said Messam. “One of the things I wanted to do was to use a viewing point as an entrance, I wanted a ‘moon gate‘, which is all about a sense of reveal. Which is essentially what the piece is about, especially in this environment, how it reveals itself and the different views.

“It’s all about exploring a site and looking at it afresh and encouraging other people to look at it in a completely different way. Because we transformed it beyond recognition.” 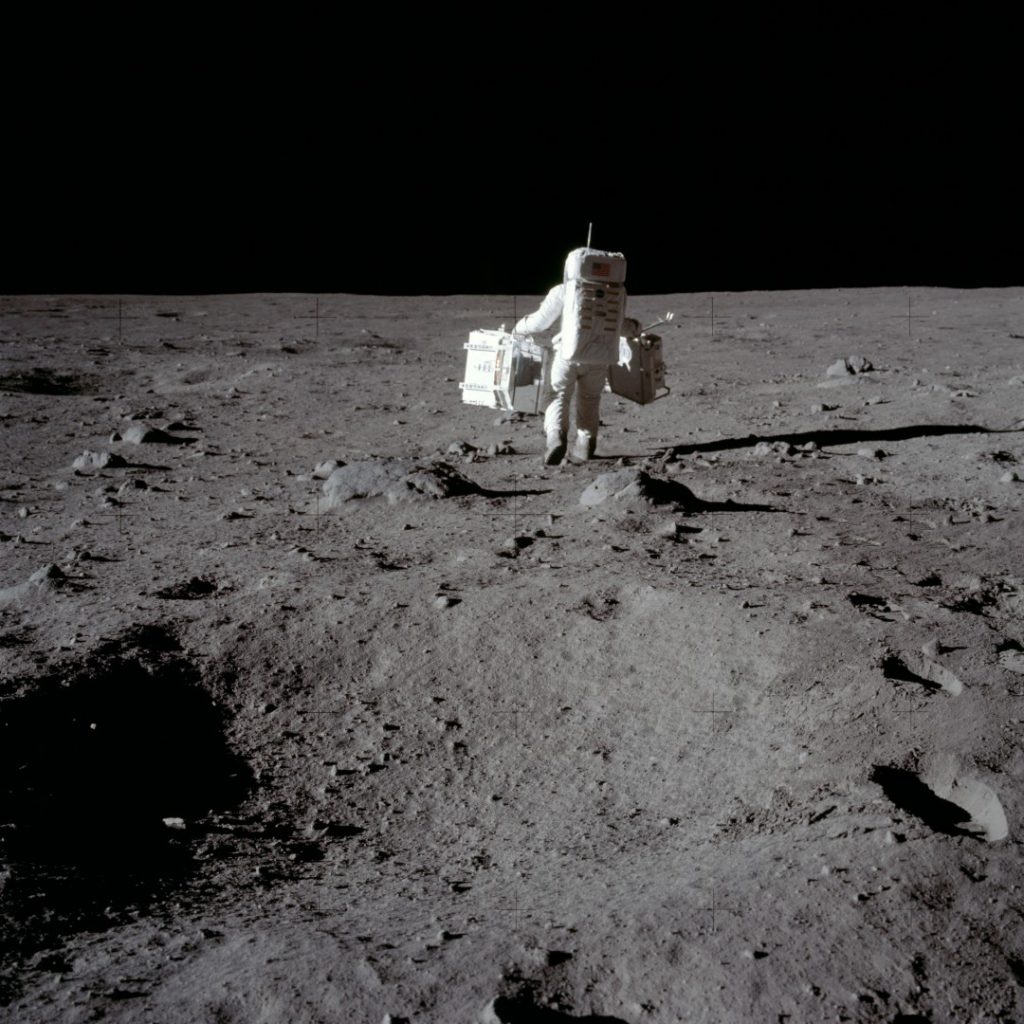 Buzz Aldrin on the Moon

Posted on 23rd November 2020 in the category Artist, Science, Space