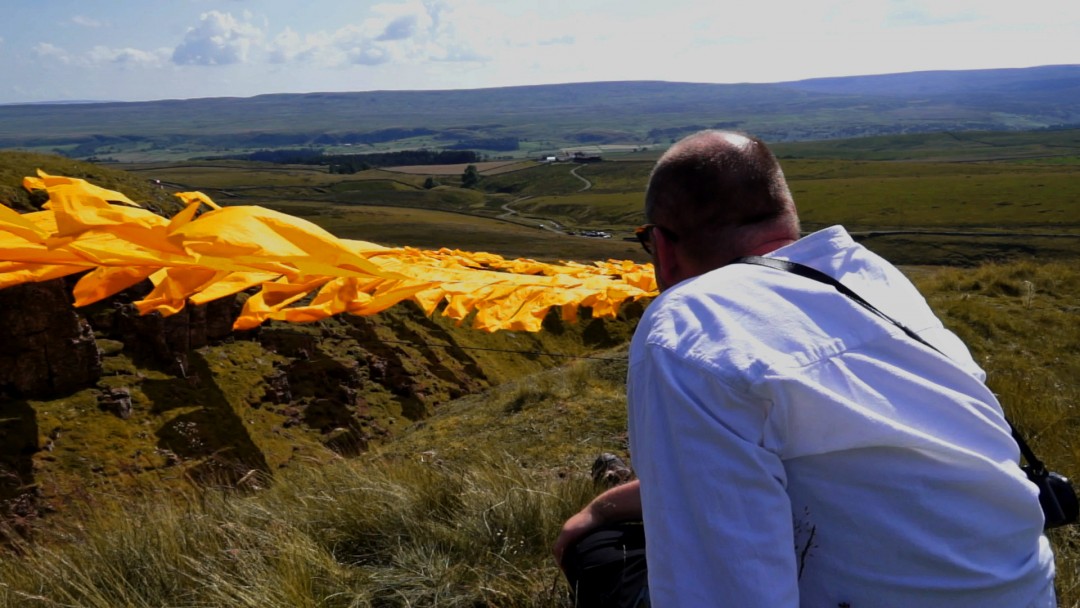 Monumental Hush: How Art Quietly Took Over a Scenic Valley in Northern England

Summer 2019 saw the monumental artwork ‘Hush’ flood an entire valley with colour and movement for two weeks. The piece by artist Steve Messam attracted more than 5,000 visitors to a remote part of Upper Teesdale in County Durham that is normally reserved for walkers of the Pennine Way and the geologically curious.

Imagine a landscape filled with colour. Not just the pinpoint yellows and delicate purples of trefoil flowers or the unwavering springtime greens of the flowing grass against a deep blue sky. Instead full flaming transgressive saffron that whips and cracks in hundreds of flags that fly up the hillside like a living fire. That was the vision of artist Steve Messam when he was commissioned by the North Pennines Area of Outstanding Natural Beauty (AONB) to bring an explosion of art to the sleepy Teesdale countryside.

Newbiggin-in-Teesdale is a tiny village of less than 200 people in one of the most picturesque parts of County Durham. To the east lies the Bowlees Visitor Centre and Low Force – a waterfall that tumbles over the Whin Sill, a rock barrier formed of dolerite, cast from molten lava 295 million years ago – with its larger relative High Force just a few minutes drive along the road. Head north from Newbiggin along a single track farm road and you can see where the lead mining hushes were worked. Each one the product of centuries of forced flooding and back-breaking labour to release lead ore from the earth.

This was the unspoiled backdrop for one of Messam’s most ambitious projects to date. ‘Hush’ was conceived as a monumental artwork that would fill the local Bales Hush with hundreds of saffron yellow flags for two weeks, attracting visitors to a remote part of Upper Teesdale that lies off the beaten track, virtually undiscovered by tourists and holidaymakers. 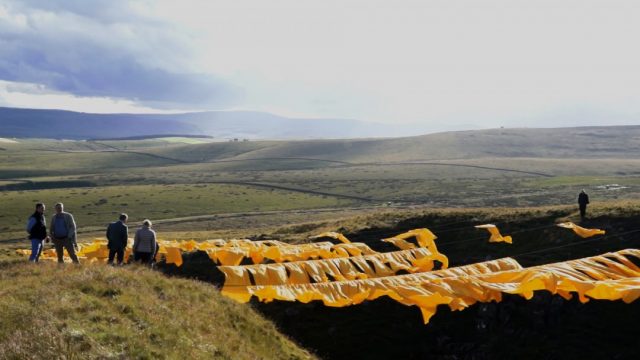 Upper Teesdale is a UNESCO Global Geopark, an area of outstanding geological importance. Rocks that make up the hills and valleys surrounding Newbiggin and the cluster of scenic villages and hamlets that dot the course of the River Tees down to Barnard Castle, were first formed 350 million years ago during the carboniferous period.

The Bales Hush was worked to extract lead back in 1525 during the reign of King Henry VIII. Hushing was eventually abandoned due to its ruinous effects on the countryside. Veins of lead ore were often owned by royalty or rich prospecting companies like the London Lead Company, but the rubble and polluting effects of lead in water courses and the surrounding soil were felt locally.

Today the Bales Hush and other mine workings are green oases of calm. They are home to nesting wading birds such as the Oystercatcher, Lapwing and Curlew. Plants, animals and terrain are looked after and conserved under the work of the North Pennines AONB. So Messam was set a task to devise an artwork that would honour the conservation orders, but attract people to see what is an area that deserves to be visited and experienced for its wild beauty. 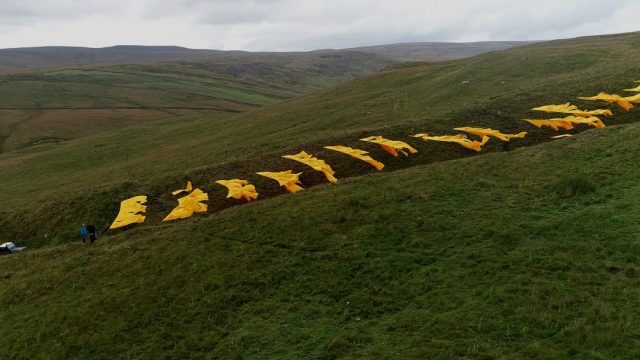 Scale is an Artform

Artwork on this scale doesn’t happen very often anywhere in the world, says Messam, and that was one of the major attractions of Hush. At more than 450 metres in length, the installation was more than three times the size of the Tate Modern gallery’s Turbine Hall. It’s safe to say that it was one of the largest artworks ever created in the UK.

In art, the hand can never execute anything higher than the heart can imagine – Ralph Waldo Emerson

“I am interested in scale and what scale does,” he said. “When you’re in a piece that large, the idea of scale has that emotional response as well. When you’re consumed within it.”

From the bottom of the steep man-made valley to the top takes around 15 to 20 minutes walking time. People were able to hike up each side to the highest part where the ropes sprang taught over crags. Or take a stroll underneath to hear and feel the flags crack stiff in the wild Teesdale wind. The contrast then of the intense yellow against the shimmering blue of the sky was remarkable.

Looking down the valley from the top the geological immensity was brought into sharp focus. When miners entered this landscape hundreds of years earlier they came in search of wages wrought from raw material, earth and rock, ore cracked open to reveal its rich innards.

They gathered water from all over the details in shallow channels that funnelled water into a reservoir at the top of the hush. Once enough water had accumulated they then opened wooden gates and let the water wash down to remove topsoil and expose the rock and ore beneath.

The miners themselves were far from rich. They toiled in all weathers to make a pittance. The owners of the hush made the real profits and those who owned the mineral rights, as history shows, often paid the working man no more than they could get away with. Supplies and tools were brought in by horse or pony, and the ore shipped out for processing. What was left behind was despoilation of the natural environment, lead poisoned brooks and broken bodies.

The filming of Hush was a minor epic in itself. Two cameras to capture timelapse and slow motion, alongside normal speed high definition shots, plus a drone videographer to get 4K shots of the hush empty and with the installation in place.

Battling the wind, constant movement of the artist and his team, and trekking up and down the hillside put some miles in the legs and made the shoot a constant challenge. But the final film, featured here, captures the essence of what made Hush such an exciting and unique project.

Messam is clearly influenced by the artists Christo and Jeanne-Claude – a married couple who created some of the first and most important environmental works of art. They wrapped Berlin’s Reichstag and Paris’ Arc de Triomphe in fabric and hung a 400 metre-long curtain of orange cloth across a valley in Rifle, Colorado.

Valley Curtain is certainly relevant here, but another piece that reflects Messam’s Hush in aesthetic is ‘The Gates‘, a series of saffron yellow drape portals that Christo and Jeanne-Claude installed in New York’s Central Park in 2005.

Messam’s public works include an inflatable keep, a bright red paper bridge capable of supporting a Land Rover Discovery, and the Whistle project for Newcastle and Gateshead’s Great Exhibition of the North. He is an artist with a strong vision and work ethic, and the strength and scale of his work continues to grow. Anyone interested in catching one of his large scale works should check out ‘folly!’ at Fountains Abbey and Studley Royal Water Garden in Ripon in May 2020.