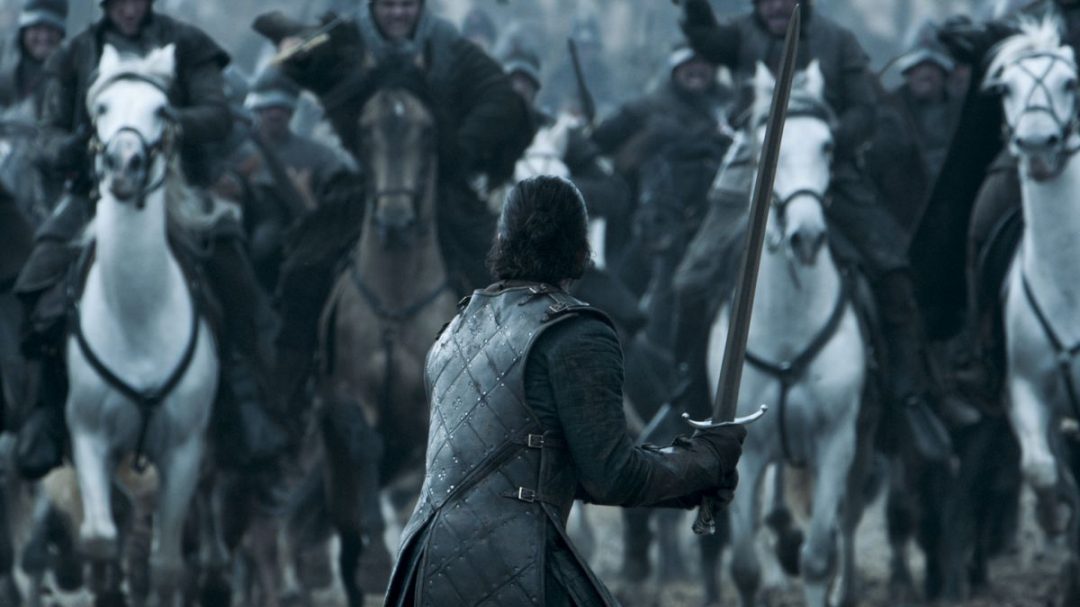 When it comes to epic battles on screen there are none more bloody or harrowing, that create the brutal reality of hand-to-hand combat as completely as the ‘Battle of the Bastards’ from the series Game of Thrones. Those incredible shots were captured by camera operator Sean Savage in one hectic month in Northern Ireland.

Sean Savage is the cameraman best known for his groundbreaking work on HBO’s Game of Thrones, but he has also worked on films including The Last Kingdom, The Look of Love, and Snow White and the Huntsman among others. He is a veteran of television and cinematic productions around the world and is the current president of the Association of Camera Operators (ACO).

Sean took part in a themed Q&A session about the camera operator’s role at the Aesthetica Short Film Festival, where he spoke about his work on Game of Thrones seasons one through eight. One of the sequences he is most proud of creating is the highly acclaimed ‘Battle of the Bastards‘ scene from Game of Thrones season six, where king-in-waiting Jon Snow’s army fights for the supremacy of Winterfell against the forces of the sadistic Ramsay Bolton.

Tell us a bit about shooting the ‘Battle of the Bastards

The whole sequence lasts for around 18 minutes. We shot the entire scene in October in Northern Ireland over 23 days, and we were pretty blessed with the weather. The scene was shot using three cameras, four at times, making use of telescopic cranes, handheld cameras, and lots of classic dollies and tripods on fluid heads or geared heads.

We had an amazing director [Miguel Sapochnik] who broke down almost every shot. It looks chaotic and hopefully it does look like the fog of war, but there was an enormous amount of homework put into it. There is a scene within a scene where John Snow runs through the battlefield and I’m following him with a handheld camera. The horse and stunt team took two weeks to put that together.

We shot in three sections, with three individual takes, and almost all of it is real apart from where you see the horses in pain, or hitting humans or each other. There’s a lot of dirt and fake blood being thrown around, and lots of smoke. It was very well choreographed.

The way it was coordinated went really well and I think we only did about five or six takes per section. As you can imagine, the turn around and getting it all going again each time took 15 or 20 minutes just to get the horses back into position.

What part does a camera operator play on set, technically and in terms of creativity?

You have a written page of script, a story, and the director has the vision. What the camera operator has to do is interpret all of the words and ideas.

In any scene the actor is under pressure, but say for example that he is being interrogated, he is scared. Do we pressure them by having the camera up close with the lenses wider? You’re reading each sentence of the script, listening to the director’s comments and interpreting the whole sensation of the film, then putting it through the camera, a mechanical object – through a piece of glass – and trying to tell a story in the best way you can.

How are you brought onto a project and what process do you go through to prepare?

I’m invariably hired by the director of photography (DP). We may or may not have worked together before, and it may be through a recommendation. He might have seen some of the stuff I’ve operated and has enjoyed it or knows my reputation. Sometimes you’re hired because the director has worked with you before and knows you will understand him.

When you’re hired you are given a script. These days you have to jump through all sorts of hoops because of the secrecy involved, especially in Game of Thrones. You read it and your imagination takes over from the words, the scenes, and you break it down with the director and the DP. The operator doesn’t normally have an enormous amount of preparation, so hopefully the director has done his homework.

We have to be very familiar with the script. We go to work knowing we might have to do scene 10, 11 and 12 that day and we then break it in to shots and create a plan. We have a strict time limit and we have to finish on time. So we know perhaps that we can spend four hours on the first scene with seven or eight shots.

We then discuss whether what we’ve shot covers a scene, whether the dialogue and the action is complete and there are no missing parts when we send it to the editing room. We have to ensure that they don’t come back to us saying that they can’t get from point A to B in a scene.

How many times have you read the script before you start shooting?

Twice before I walk onto the set. The director’s rehearsal can be a locked room, but if you have a good relationship with them they like the DP and camera operator to be in the room at the same time. When I then hear the actors say the words for the first time in that rehearsal it really plants the script in my head. And then I can then really go forward with the ideas on how to shoot it.

What sort of equipment do you find yourself using most on set?

I am fascinated by the grip side of things and I always try to think about how it can be gripped. We have engineered equipment that can move our cameras really well, so that we can walk along the street with people or film them from above. We have invented telescopic cranes for cinematic work and if you want to be more inventive you can put them on a rail.

Telescopic cranes range from 12 feet up to about 100 feet high and everything I work on nowadays has a remote head with two or three axis stabilisation. What that allows you to do is incredible. It makes the set really three dimensional. I can focus on a small corner of the set and then zoom out to a wide shot. The freedom those pieces of equipment have given us is extraordinary. 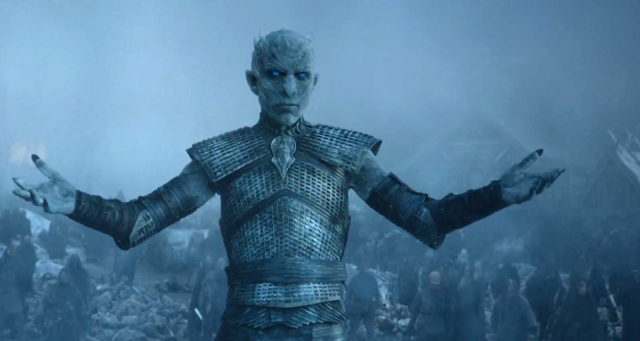 Playing it cool: the White Walkers form an otherworldly army to challenge the world of men.

In films the operators have moved on from geared heads and we now use wheel controls. We have two wheels that operate pan and tilt, up and down, left and right. It takes some time to learn, but in season eight of Game of Thrones, I shot 65 per cent of the movie over 10 and a half months on a 65-foot telescopic crane with a remote head.

What about the camera stabiliser system Steadicam?

You don’t have to learn Steadicam, but if you do then you are more attractive as a camera operator. There are a lot of American television programmes and films being made in Britain and Europe at the moment. We are really lucky that we are a hub of activity. An American production would assume that the camera department would have a Steadicam operator in it all the time.

That would be one of the two operators. It won’t suit everyone, it can be horrible to use. It is also overused at the moment. I am quite a strong character on set and I am the first to tell the director if it really is not the tool for the job. You are guarding the look of the film and the directors will appreciate it in the end.

‘What did you say about male domination?’ – Game of Thrones dragon queen, actress Emilia Clarke

Because of our luxurious budget on Game of Thrones we have a Steadicam which I operated. There are quite a few other devices too that do the same job. Movi is one that crossed over from the amateur to professional market and there are now two or three other companies producing rival equipment.

On my last three projects we have used a stabilised head that two grips can run with and can be remotely operated. I sit there by a monitor and talk to them and they become this sort of human dolly. I can go low and high in one shot. One grip can run with the actors, then the other can take over and do the delicate stuff, gentle moves.

It is very adaptable – you can film shots such as running down staircases. I can have two young fit grips running down a stone spiral staircase as fast as they dare and all they have to do is watch their feet. Steadicam operators have attempted similar shots over the years and all I can say is that some have done it better than others.

It is still a very white male-dominated industry in the UK, so what is the ACO doing to encourage diversity?
ACO does have a diversity committee and we are super aware of our profile as white, middle-aged men. We are very keen to change that. I have been in the camera department for 35 years and a camera operator for 22 years and it does take a long time. We really want this to happen, but my message is that it will take a little while to get these people through.

Posted on 6th March 2019 in the category Camera, Filming, TV