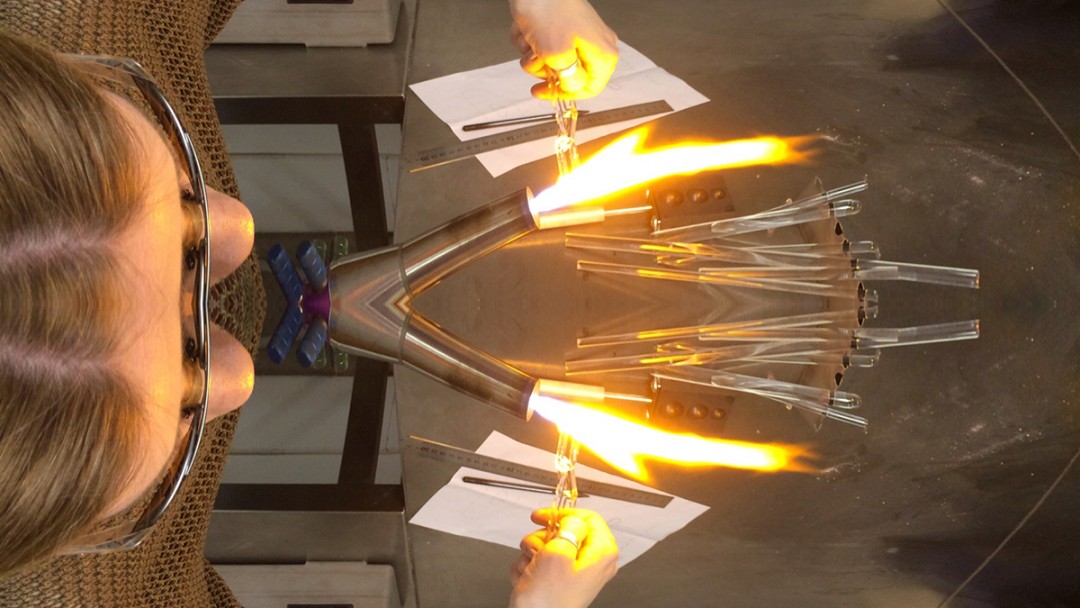 Inside the Artist’s Studio: Creating Film for Exhibitions and Video Installations

One of the most rewarding forms of filmmaking is capturing the artistic process. An invite into the artist’s studio is always a privilege and the start of a creative journey.

The artist’s studio is where magic happens. It is where the creative process is given free rein. Anything is possible, everything is allowed. The studio could be a tiny industrial workshop in the city, or a converted barn in a remote rural village. Artists can work just as well in a simple studio space in their home, like a spare room or even the corner of a room. They make art despite restrictions: they just need to create.

To capture the thoughts and actions that go into those creations on camera is incredibly satisfying. I’ve been lucky enough to work with an interesting and innovative mix of people and the films are, I hope, thoughtful and revealing. All so far have featured as video installations in gallery exhibitions, giving visitors a glimpse into the artist’s motivation, showing how and why the work was made.

Sculpture, drawing, painting, glass, furniture design and textiles are just some of the media used in these films. Each artist had a wide range of methods to produce their work. Each was influenced by historical and modern techniques, and their own personal experience. The exhibitions included a collection of a young artist’s work to date, a series of works based on a short story, and a major collection spanning two decades.

One of the most well-established was Anita Taylor, who approached her art from the seminal practice of drawing first. As she says in her film, drawing is not just a preparatory tool, it is her means to understand and represent herself and others. Many of her large charcoal drawings are self-portraits and she is keenly interested in the idea of women portrayed by women, rather than by men – an artist for our times.

Anita was extremely articulate and knowledgeable. Her studio is in a grand old building complex in Wiltshire not far from Bath Spa University, where she is the executive dean at the School of Art and Design. She is also the founding director of the Jerwood Drawing Prize, the pre-eminent annual open exhibition for drawing in the UK.

Light flooded in through the large windows and her drawings stood on easels waiting to be worked on. Her books and paintings were there too and the atmosphere was calm with an undercurrent of tremendous industry. We shot the film and interview in one day, with a trip to the university gallery for extra footage.

Many of the drawings featured in the film were chosen for the exhibition ‘DRAWN‘ at The Customs House Gallery, curated by Esen Kaya, featuring work ranging from Seeing Something Else (1993) to the present Witness series (2017).

In contrast, two of the artists I filmed worked almost exclusively with glass at Sunderland’s National Glass Centre (NGC). The NGC is the UK’s centre for excellence in glass art, bringing contemporary work to the north east from around the world.

Zoe Garner is a superb flame worker and glass sculptor whose work includes both immaculate glass jewellery and large-scale installations such as high-end chandeliers. She runs workshops at the NGC on flamework and she asked me to produce a film for her website that would show the skill involved in making glass objects using the burners.

I produced two edits – one colour and one black and white (which Zoe chose for her website). The music was Zoe’s personal choice and she was extremely happy with the way it highlighted the dynamic nature of flamework. The film was used roughly a year later in an exhibition of her work at the NGC.

One commission led to another and glass artist Helen Pailing asked if I would produce a video installation for a large glass sculpture she was working on as part of her PhD. Adorn was made using reclaimed glass from the flamework studio. Pieces were hand selected from the waste bin and wrapped in copper tape, then sprayed with water to created an aged patina.

Helen wanted the piece to be inclusive so she workshopped the wrapping process with local community and arts groups before building the final sculpture. Each glass object was attached to a steel frame or rope using wire and the completed sculpture was then hoisted into place above the quayside entrance. Zoe Garner has a brief cameo in the early part of the film as she created some of the glass objects used in Adorn.

The idea behind the video was to give an impression of how the sculpture evolved by cutting back and forth between the finished piece and glimpses of the processes involved. There was to be no explanation or voiceover: we would simply allow the pictures to tell the story.

Helen didn’t want to be the ‘face’ of the piece, or talk viewers through the concept and we allowed only snatches of ambient sound and conversation from the wrapping process into the final film. I think we managed to successfully capture the essence of Adorn without saying anything. It tells its creation story without narrative.

Art is a Story

Many artists are incredible storytellers and that is the enduring power of their work. Look at the character detail in the absinthe drinker of Degas or the catastrophic power of Picasso’s Guernica. When it came to shooting an artist’s studio film for Anne Curtis there was a similar process at work.

Anne is a publisher and artist of great versatility. She works with glass, textiles, printing techniques and interior design. Her exhibition at The Customs House Gallery was based entirely on a short story she wrote called ‘The Poison Gardener’ – a dark tale of love and loss.

Shortly before her exhibition she was a contestant on BBC Two’s The Great Interior Design Challenge and you can see the skilled level of detail in Anne’s work. The shoot took place at her home near Sunderland and it contains personal affects that only an artist’s living space would. Her house really is a living work of art littered with beautiful paintings and vintage objects. Even the wallpaper is handcrafted.

She talks about her art as an expression of her inner life, without boundaries. The exhibition ‘Dreaming of Home’ allowed her to create imagined interiors from the Poison Gardener’s house – one large scale and another a miniature dolls house. She took an ornate glass cabinet and refurbished it, filling it with vintage pharmaceutical bottles and laying glass transfer prints onto the doors, to make it look like a medicine cabinet. The resulting exhibition played with perspective in a way that I hope we expressed in the film.

Ailish Henderson exhibited at Customs House at the same time as Anne Curtis and I was asked to create a video installation for them both as part of an online video archive of gallery exhibitions. Ailish and Anne’s exhibitions were curated by Esen Kaya, offering unique snapshots of the artists and where they both were in their respective careers.

At the time Ailish was still in higher education studying textiles. Her artistic practice and style was still in development but what struck me was her similarity to Anne Curtis, an artist in the midst of a rewarding career. Stories were central to Ailish’s art too and her paintings and textile works for this exhibition were based on a poem she had written called ‘Torn Umbrella’.

The poem was about facing a tempest with only the meagre protection of a torn umbrella. It represented frailty but also personal triumph in the face of adversity. We have all had to face the storm with only a torn umbrella.

Ailish’s studio was a spare room in her parents house and the shoot itself was all about using the space creatively and capturing the spirit of her work. Everything in that room was deeply personal to Ailish, a condensation of her thoughts and feelings over the years. Scrapbooks, pictures, drawings and clothing were all part of the process and I think the film shows a young artist growing into her role and becoming more comfortable in her skin.

If you would like to find out more about how WeLove Media can help you document arts projects and exhibitions please email us at hello@welovemedia.co to discuss it.

Posted on 14th March 2018 in the category Artist, Studio, Video