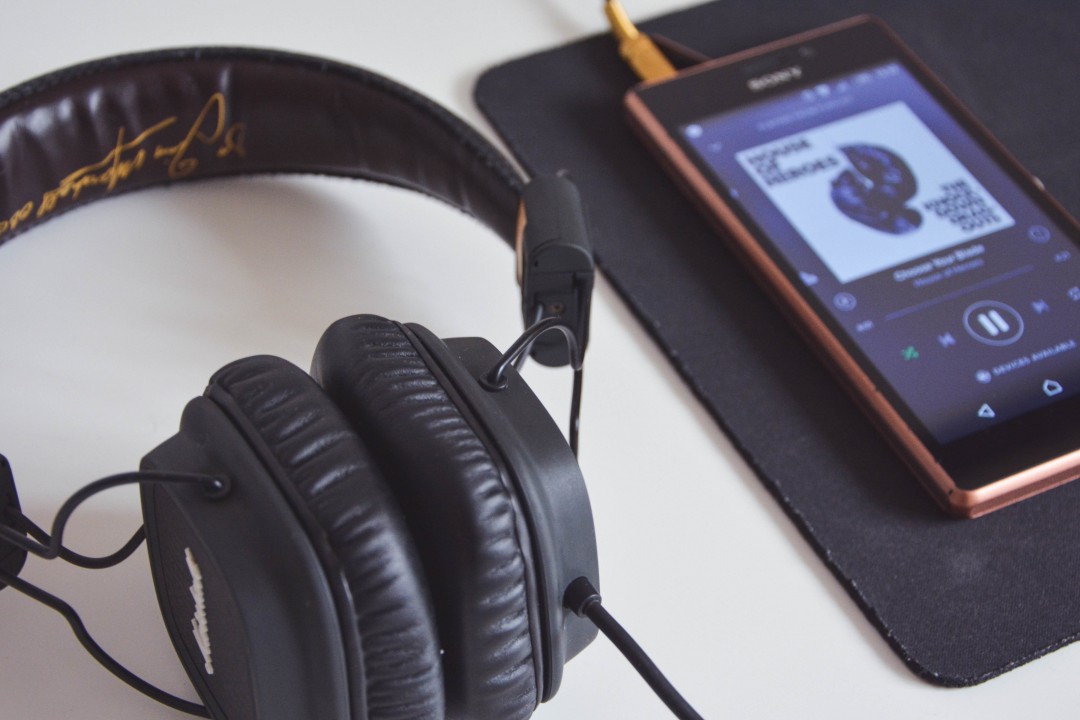 Audio is often an overlooked element in video recording, but it is crucial to getting great results. When shooting mobile video you should make sure that sound quality is as high as possible, and this short guide will show you how.

When I first started shooting video I was lucky enough to talk to a sound recording artist about the importance of audio in video productions. He pointed out to me that nearly all the sound in TV and film production, outside of speech, was artificially created. That was something of a revelation to me and made me look at shooting in a new way.

Of course, if you’re shooting a promotional video for your business, an interview with someone interesting or important, or just capturing the atmosphere at a gig, then how the sound stage is set is less important. But you should still aim for the best audio results that your budget can buy. That means using your mobile in the best way possible, and looking at audio accessories to enhance sound on your video. 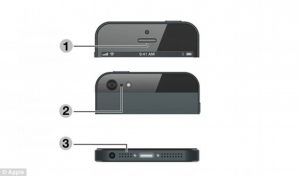 Microphone set up on the iPhone 5S

How the Mobile Microphone Works

Where the recording microphone is on your mobile depends on the model. On iPhones like the 5S and 6 there are multiple microphones, one for the rear and front camera and one at the bottom for voice recording. All of them are omnidirectional mics – they pick up sound from all round the microphone. So if you want to record an interviewee’s voice you should stand with your phone close to them, in an environment where there is no, or little, intrusive background noise. Android phone mics work in the same way and it is usually only the position that changes.

You can improve the audio input of simple things like video interviews by buying a microphone for your device. I own a Rode Smart Lav+ lapel (or lavalier) mic which I find invaluable for recording one-on-one interviews. The Smart Lav is an omnidirectional mic that you clip to your interviewee’s clothing and it picks up speech really clearly.

On top of that I have a Sennheiser ME66 shotgun (long, thin) directional microphone. This is a super cardioid condenser mic and it picks up sound from wherever you point it, ie in a kind of heart shaped pattern (hence the cardioid description) with most of the pick up from the front of the microphone.

My Sennheiser ME66 shotgun

My Sennheiser has an XLR-type connection used in many broadcast and live recording scenarios. It can attach to my iPhone direct using a connector such as the iRig Pre or iRig Pro, which connects the XLR to either the dual headphone/microphone jack (iRig Pre) or the lightning connector (iRig Pro). I actually use a handheld audio recorder, the Zoom H4N, which has XLR plugs on it. Sound is then synchronised with video in the edit.

Both of these microphones give me much better audio than the microphone on the iPhone and there are lots of options out there for anyone who really cares about audio quality. Each has its own advantages in certain types of situations.

One microphone that is consistently recommended for recording interviews or for typical broadcast situations – all you Periscope, Facebook Live and Youtube Live streaming fans out there – is a handheld mic that you typically see TV presenters use. These dynamic mics can also be plugged in to the microphone jack or lightning connector. For the record, microphones that plug into the lightning connector free up the headphone jack for audio-level and background noise monitoring. 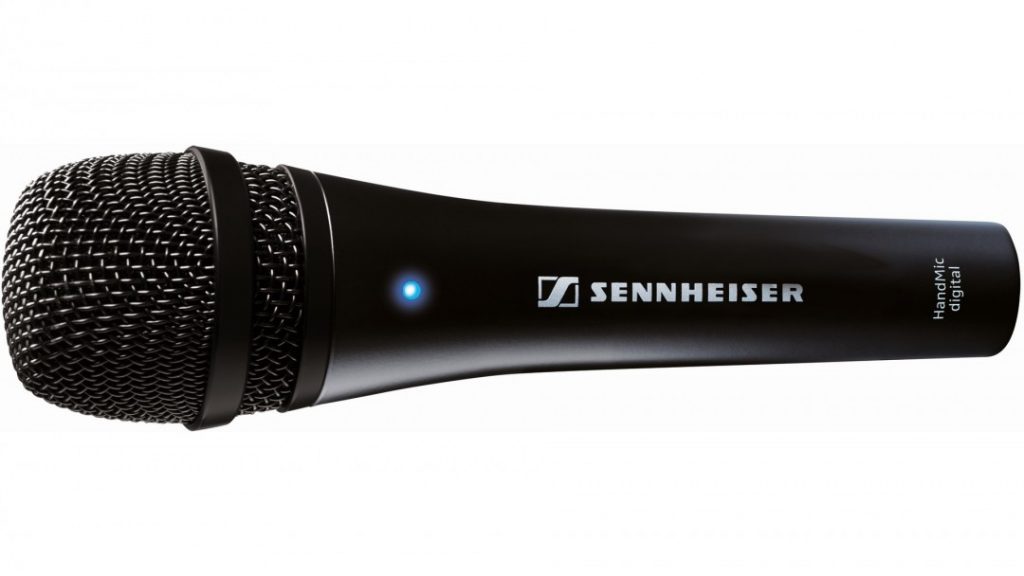 For a rundown of the different types of microphones available, try these great intro guides from gearank.com, Desktop Documentaries (including wireless mics) and Videomaker – which also has some advice on using boom poles and recording outside.

Also look at Parts Two and Three of Video University’s ‘Audio for Video’ for some excellent practical advice on audio production. One thing that becomes apparent is that there is no one microphone or set up that is perfect for all situations.

The excellent Glenn Mulcahy at Irish broadcasters RTE has put together a fantastic Thinglink interactive image board of the products available to iPhone audio and video enthusiasts. Many of these products are available to Android users too, but iPhone has become the platform of choice for the majority of mobile journalists. This is largely due to its uniform design and the stability of iOS for app developers. There are so many great audio and video apps for iPhone users. While Android users have lots of choice too, the version of Android your phone runs and its individual design can vary greatly and this dictates what is available. 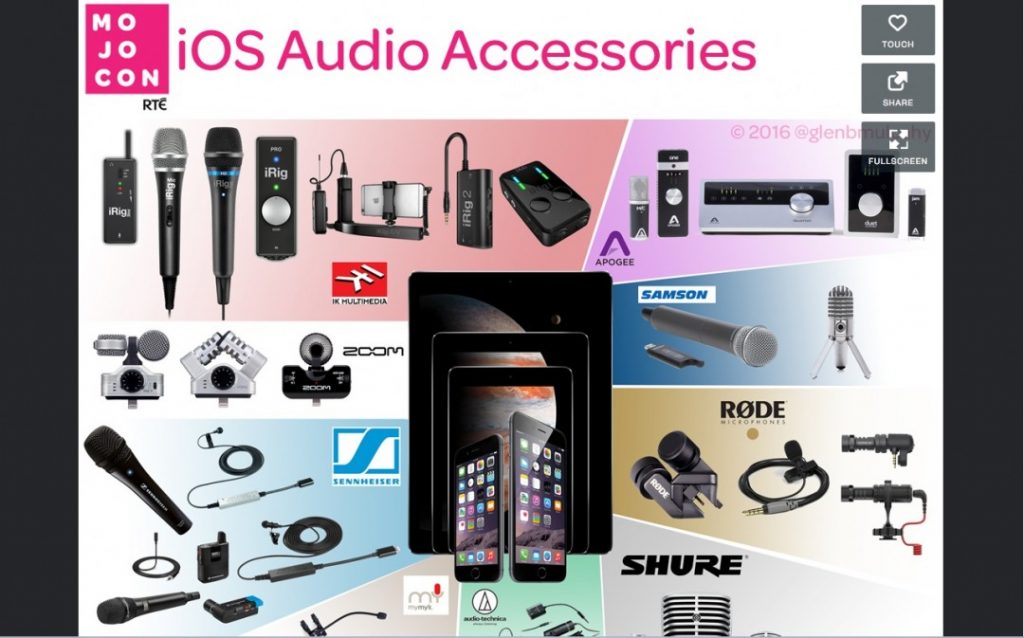 Online Video offers up this short post on recording audio for video on iPhone and Android phones. Importantly they note that the real difference between professional and amateur video recordings is the sound set up. I would just add ‘dig in’ and start to upgrade your video productions today by investing in some audio equipment.